I know it’s been a while since I’ve posted anything, so here’s an interesting story for you from the NY Times. 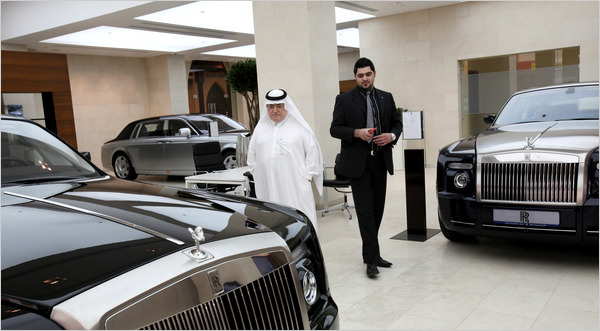 A Lebanese salesman showed a Qatari cars. Citizens make up about 15 percent of the population.

DOHA, Qatar — Citizens of Qatar appear to have it made. They tend to drive big cars, live in big houses and get big loans to pay for big watches and an outsize lifestyle. They have an army of laborers from the developing world to build a sparkling skyline and to work whatever jobs they feel are beneath them. And their nation has enough oil and gas to keep the good times rolling for decades.

Foreign workers in Qatar. There is tension, anger and frustration between Qataris and foreigners.

So why do so many people here seem so angry?

The problem, many Qataris say, is that they resent being treated as a minority in their own country, which is what they are. Citizens make up about 15 percent of the nation’s 1.6 million people — a demographic oddity that fuels a sense of privilege and victimization.

“The priority always goes to the foreigner,” said Ali Khaled, 23, who is finishing his government-financed education in London.

His cousin, Omar Ali, 24, a high school dropout who works as a technician in an electric company, readily agreed: “They always think the foreigner is better at any job than a Qatari, even if the Qatari is perfect at the job.”

In many ways, they appear to be right about how they are perceived.

“Qataris are very spoiled,” said Mohammed Saffarini, a non-Qatari Arab who serves as research director for health science at Qatar’s Science and Technology Park. “They are only valuable in this cultural and political context,” he added, contending that Qataris often lacked the skills, education and qualifications to be competitive in many other economies.

On the surface, Qatar appears to be on a roll. This peninsula of sand jutting into the Persian Gulf has leveraged its oil wealth and unbridled ambition to garner a world-class reputation on many fronts: international relations, art, higher education. But at home, there is tension, anger and frustration between Qataris and foreigners.

“It’s all a sham; it’s all a veneer,” said Dr. Momtaz Wassef, who was recruited from the United States to serve as the director of biomedical research for the Supreme Council of Health. Now he says he is disillusioned with Qatar and is planning to leave. “They never admit they make a mistake,” he said. “They only say they are the best in the world.”

Dr. Wassef’s wife asked that he not be quoted until he left Qatar, but Dr. Wassef would have none of it. “I don’t give a hoot,” he said, clapping his hands together for emphasis.

Qataris do not see themselves as coddled. Sure, they do not have to pay for electricity, water, education or health care, and they are given land and low-cost loans to build houses when they marry. They are eligible for public assistance if they do not have a job, often receive generous pensions and acknowledge they will not take any jobs they do not consider suitable for them.

But they also complain that they do not get paid as much as foreigners, and that foreigners get most of the top jobs in critical industries, like finance, higher education and the media. There is also pervasive frustration that English has become the language of employment, not Arabic, and that local hospitals, restaurants, markets and streets are always crowded with foreigners.

“There is a crisis here,” said Muhammad al-Mesfer, a political science professor at Qatar University. “The foreigners are crowding us out.”

The tension in Qatar is similar to what has surfaced in Dubai, United Arab Emirates, where local people are also vastly outnumbered by foreigners and are sometimes likened to colonial rulers in their own land.

“There are about 300 employees at my work and only 4 or 5 Qataris,” said Mr. Ali, the technician at an electric company. “I walk into work and I feel like I am in India.”

He said that the foreigners were never willing to teach him new skills, so he had lost motivation.

“I have been working there for three years, and I still haven’t fully grasped the work,” he said. “I go to work to drink tea and read the paper.”

During a seven-day visit to Qatar, conversations with expatriate workers and Qatari citizens almost always turned to the topic of distrust, even during the most mundane of encounters.

“I am Qatari, and this country is for me,” a driver shouted as he forced his way into a parking space that a Canadian driver had also been trying for. “This is my country.”

Part of the frustration appears to stem from the lack of an effort to address the differences. People here said that when complaints had been raised, those who spoke up got punished. Foreigners get sent home and local people lose their positions, they said.

Qataris and foreigners alike described a social contract that offers material comfort and financial reward in exchange for not challenging the government’s choices. Qatar is a constitutional monarchy led by Sheik Hamad bin Khalifa al-Thani and his council of ministers. For many, the bargain is worth taking.

“To be honest, I’m comfortable and the salaries are good,” said Ibrahim al-Muhairy, 29, a Qatari high school dropout who said he earns about $41,000 a year working for the government as a security guard in a mall. “Everyone is getting what he deserves and more.”

But there are plenty of others who are unwilling to ride away silently in their Mercedes sedans, like Ahmed J. Abdul-Rahman Abdul-Malik, a former news anchor. He said he was furious that he had not been hired to read the news on Al Jazeera, the popular satellite news channel that broadcasts from here. He has written opinion pieces for a local newspaper complaining that Qataris are now treated as second-class citizens in their own country.

“I met with my friends last night, we joked, we are all ‘ex,’ that means unemployed,” he said, as he climbed into the driver’s seat of a Mercedes sedan. His diamond-crusted watch glistened beneath the parking lot lights.

Moza al-Malki, a family therapist, said she was angry, too. She said that she had lost her teaching position when she complained that an Indian woman was hired to run a counseling center that she said she had set up. “We are all angry for staying at home,” she said.

A moment earlier, she turned to the Filipino woman walking one step behind her — a servant carrying bags — and told her to go look around the mall they were in while Ms. Malki ordered breakfast. Ms. Malki ordered a croissant with cheese, sent it back because it was too hard, and then settled on an omelet.